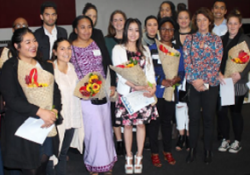 Pegasus Health (Charitable) Ltd awarded its annual scholarships to 21 students from Māori, Pacific and refugee and migrant backgrounds on Thursday 11 May 2017.

Race Relations Commissioner Dame Susan Devoy, who was the guest speaker at the event, congratulated the recipients and urged them to celebrate their achievements, which for many had involved overcoming difficult obstacles.

Each year, a number of scholarships are awarded by Pegasus Health to the highest calibre of applicants from incredibly diverse backgrounds, with the aim of enhancing the cultural and linguistic richness of the health sector.

In applying for a scholarship, each of the recipients had to write a 1000-word essay about their backgrounds and their reasons for pursuing a career in health.

Professor Les Toop, Chair of Pegasus Health (Charitable) Ltd Board says the awards are a highlight in the Pegasus calendar.

“This annual event is a real celebration of overcoming adversity. Recipient’s personal stories of how they have come to be involved in healthcare, things that drive and inspire them, are so powerful. There’s often not a dry eye in the house,” says Prof. Toop.

Māori scholarships were awarded to seven recipients, three of whom are studying medicine, two are nursing students, one is training to be a midwife, and one is studying human nutrition.

Medical student Stacey Lambert hopes to use her passion for community health to make a real difference to health outcomes for Māori. Stacey has been involved with a number of Māori mentoring programmes and says she has been grateful for the opportunity to talk about important issues such as smoking, diabetes, cervical cancer and having a healthy lifestyle.

Originally from the Hawkes Bay, she hopes to take up a role in a rural town once she graduates. “I want to continue to learn as much as I can and I think you might get to see a lot more as a junior doctor in a small town than you would in a big hospital.”

Aroha de Bie, a third-year nursing student, was another recipient. She aspires to work in primary care, before specialising in mental health.

Erin Waldron, a third-year Applied Science student studying human nutrition, is a part-time personal trainer, Erin intends to pursue a career that explores her interest in Kia Kaha health and wellness in prisons.

This year’s Pacific Scholarships were awarded to six students. Three are studying medicine, two are studying psychology, and the other is training to be a nurse.

Psychology student Joshua Leota is one of the six and says he is aiming to work with young Pasifika people who, like himself, have struggled with finding their way in life. Joshua says he started tertiary study straight out of school but found it too overwhelming and took some time out to do other things before returning to university in 2015.

“Being a clinical psychologist is my big goal. I’ve always been drawn to helping people who are trying to find their way through problems and I am becoming more and more involved in the Pacific community.”

Another to receive a scholarship is Mosana Evagelia, a fourth-year medical student, Mosana is a member of the Pacific Island Health Professionals Students Association and is interested in following a career in obstetrics and gynaecology.

Second-year psychology student Faamele Tuipulotu has recently served on a volunteer mission in Indonesia, Faamele aspires to turn her interest in mental health into a career as a psychotherapist.

Eight scholarships were awarded to students from Culturally and Linguistically Diverse (CALD) backgrounds. Five are nursing students, two are training in medical imaging, and one is studying medicine.

Folasade Iposu is a second year nursing student who had completed a microbiology degree, emigrated to New Zealand, and had four children before discovering her passion for nursing.

Nigerian-born Iposu came to New Zealand with her husband, who was completing his PhD, and their children in 2004. To juggle her family commitments, she opted to work as a hospital aide, until she had time and money to add to her microbiology qualifications.

Instead, she fell in love with nursing. “My Mum always told me that I should go nursing and she was quite right. I want to be a community nurse eventually but I also really like being able to give people quality care at the end of their lives. I love it, absolutely love it. ”

Scholarship recipient Naofumi Osato, of Japanese descent, says she plans to continue advocating for improved quality of health care for the LGBTQI community.