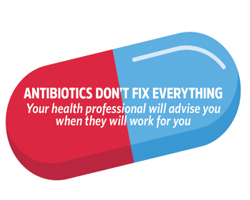 The growth of antibiotic resistance is a major global threat
and has triggered repeated calls to improve the way we use
antibiotics.
Antibiotic use is a major driver of resistance and New
Zealand has comparatively high rates of antibiotic use
compared to other Organisation for Economic Co-operation
and Development (OECD) countries.
The World Health Organization (WHO) has publicly
recognised antibiotic resistance as a leading threat to
human health and endorsed a Global Action Plan back in
2015. In response, New Zealand’s Ministry of Health committed to
the National Antimicrobial Resistance Action Plan in 2017.