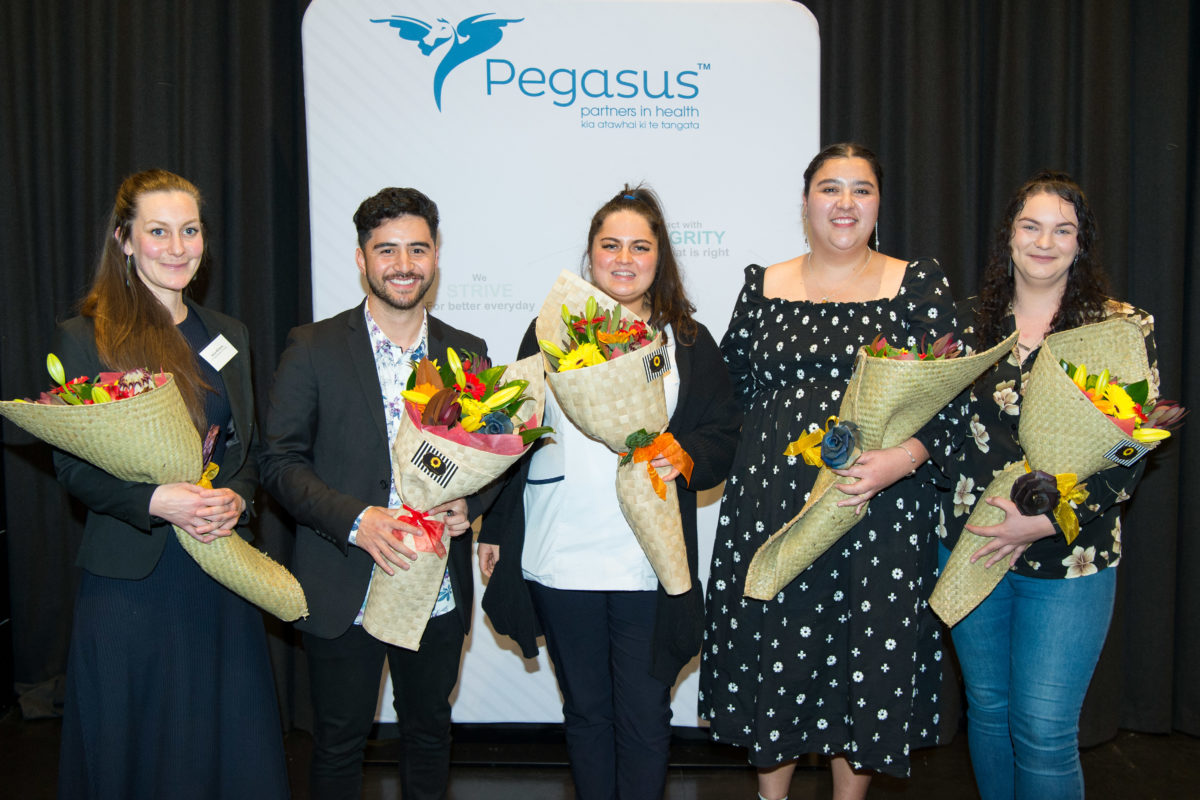 The annual Pegasus Health Scholarship Awards held in May proved to be another powerful and emotional evening celebrating the diversity and successes of our 16 recipients.

Samuel Equbazgi was an experienced journalist working for the Government’s Ministry of Information in his East African homeland of Eritrea before he was forced to flee. He says he felt unsafe and insecure, he was oppressed and having a Government job meant he was vulnerable.
In 2019 he was sent to New Zealand as a refugee, and today he is in his second year of a Bachelor of Social Work degree with Honours.

“I know what it’s like to be oppressed, to have no freedom to speak and to see friends imprisoned. I couldn’t be the person I wanted to be in my own country. In New Zealand I have only found love and friendship. I want to be a social worker to support people and change their lives for good.”

Samuel was among the 16 scholarship recipients overall this year and one of five from the Culturally and Linguistically Diverse (CALD) group. In accepting his award, he began by apologising for not being a confident public speaker, then went on to mesmerize the 150 friends and whānau gathered at Turanga as he recounted his journey of emancipation.

“The scholarship is an acknowledgement of hard work; it gives me motivation. My journey has been tough, but I am one lucky person,” he says.

He told the audience there are huge disparities in health that need to be addressed before wellbeing can be achieved for Pasifika people, and warned scholarship recipients that the way ahead will be difficult.

“Nursing, medicine, social work in the context of your own cultural group – it is hard work. It is hard, but it is so rewarding and one of the greatest gifts you can ever have,” he said.

Hineari Kahu (Ngāi Tahu, Ngāpuhi, Ngāti Tūwharetoa, Ngāti Whakaue) a fifth year Bachelor of Medicine student from Kaikōura is resolute in her plans to return and work in her community as a doctor. Receiving her scholarship, she acknowledged the legacy of her tāua (grandmother) Miriama Kahu, who in the 1990s founded the town’s first and only Māori health provider, Te Tai o Marokura Whānau Health and Social Services.

“I decided to be a doctor when I was 6 years old, and ever since I have been encouraged, inspired and nurtured by my whānau to fulfil that vison. I will specialise in general practice and rural medicine to return to Kaikōura as the first ever Māori GP. I am proud to add to my taua’s legacy by providing a by Māori for Māori service through Te Tai O Marokura.

“This scholarship not only brings financial relief, but it further supports that dream,” she says.

Guest speaker Suli Tuitaupe, a former Pasifika scholarship recipient, spoke of the work he and his clinical and health promotion teams are doing at Tangata Atumotu Trust, the Pasifika community health and social service provider. Two days a week he also works as a Practice Nurse at Eastcare Health.

He congratulated the recipients on their success and encouraged them to be proud of their identity, ethnicity and culture.

“This is just the beginning of your journey, do the hard yards now and you will reap the rewards. Stay in the journey together, be the change agent, never give up the crusade of improving health outcomes and ultimately achieving health equity for all New Zealanders.”

Leon Haiu spent many years as a youth worker supporting rangatahi within residential homes, he held different community worker roles and worked as a Corrections Officer for two years; and never dreamed of being a nurse.
However, the experience of losing his brother to cancer and the opportunity to work within Auckland and Middlemore hospitals’ acute inpatient mental health services opened his eyes to the opportunities nursing could offer.

“It was there I got to meet firsthand all these Māori and Pasifika nurses – and there were heaps of males – that really encouraged me.”

Leon, was born in New Zealand, but comes from the tiny Pacific island of Uvea. He is in his second year of a Bachelor of Nursing at Ara and wants to be a mental health nurse. “There’s huge need everywhere particularly in primary health and our Pasifika communities,” he says.

Pegasus Health, Acting Chief Executive Officer, Mark Liddle closed the evening and noted that over the past 10 years that he has been attending the awards he had met so many deserving recipients, and it was an honour and a privilege for Pegasus to continue to support diversity in primary health and this year’s recipients on their health career journeys.