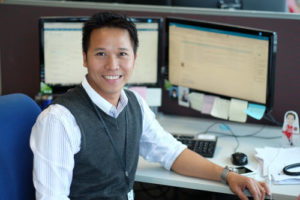 Principal Software Engineer Red Mati and his family arrived in Christchurch, New Zealand from Singapore in 2011.

“I was lucky enough to get a job with Pegasus Health as a Senior Software Developer working on a new online system called ERMS (Electronic Request and Management System),” says Red.

The project was designed to speed up health service referrals and move them from a paper-based process to an electronic form.

“At the start there were only three of us on the team and now there are eight. Being my first job in New Zealand, it was a very good opportunity to understand how Kiwis work. Our team has people from all over New Zealand and the world. We are dedicated and work hard and we enjoy coming to work each day and have a lot of fun.”

“It’s great to see the humble beginnings of the ERMS programme turn into something big. It’s now the largest referral management system in the country and has been adopted across the whole South Island. It’s very fulfilling to think that I have contributed to this success.”

When Red started at Pegasus, the organisation had just started using a new methodology for software development, called Scrum.

“It was a good time to join, as the process has allowed the software development in the organisation to reach a new level of maturity.”

In 2015, Red was promoted to Principal Software Engineer.

“This new role means I can act more as a leader and mentor to my team, both with technical issues and personal motivation. I try to bring energy and positivity to my team,” says Red.